Bodegas El Grifo is the oldest winery of the Canary Islands. On November 12, 2015 its 240th anniversary was celebrated.

It is located in Lanzarote, a land where the culture of wine is something very special and different from any other place. The climate is arid, dry and very windy. It is only because of the volcanoes that the wine can  be made.

In 1730 there was a town called El Grifo with abundant dry land crops. The volcanoes erupted and everything was covered in lava. Even the island changed its size and is now even larger.

The Bishop of the Canary Islands paid some gentlemen to remove the lava from their land but that task was impossible, however, because of Bishops request  it was discovered that under the lava there is fertile land and water.

At the beginning, because of the volcanic soil, it was believed that  wine was of pure quality. The great crisis of 1880 produced the collapse of trade with America and because of this Estevez family, the founding family of El Grifo, were forced to sell the winery. 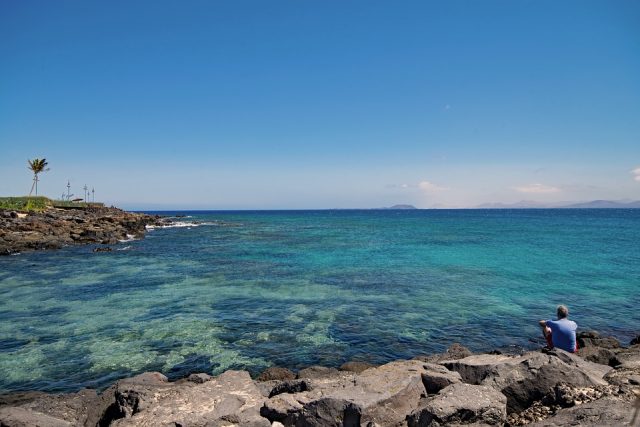 The Grifo was acquired by the Rodriguez-Bethencourt family. They were the ones who started making wine and are still its owners today. Bodegas El Grifo produce 27% of Lanzarote wine. They own more than 60 hectares of their own vineyards. They work with other winemakers who sell their grapes – more than 200 – and who follow their indications.

Malvasia was brought from Catalonia and today this kind of grape is not found in Catalan lands since its disappearance as a result of phylloxera.

Vijariego  was brought from the south of the Iberian Peninsula, an area from which it also disappeared.

Others varieties used are the listán black and the listán autochthonous of the Canary Islands, as well as the Muscat of Alexandria. The French ink shiraz  is ideal for making breeding wines given the climatic conditions of the area.

In the winery they explain that wine is made from many varieties of grape. The grape harvest begins at the end of July, the list black and white in mid-August, the diego and the Muscat of Alexandria in late August-early September. around 500,000-700,000 kilograms of grapes are collected per year.

Nowadays El Grifo Winery has capacity to produce 1.2 million liters. It has large stainless steel tanks. The cooperage is made up of 500 liters barrels of French and American oak. The total production varies according to the harvest between 400,000-600,000 bottles / year.

At El Grifo Winery wide range of wine is produced: dry white, sweet, semi-sweet, rosé, young red and aged and also sparkling. At the beginning the grapes are stored in cold rooms to control the process, then they are removed and thrown into the hopper. Fermented at 25º Celsius for 8 days. Next, the malolactic fermentation takes place in the barrel, after which it remains in oak barrels for twelve months and then refines one more year in the bottle. It is an interesting wine for its curious varietal composition.

The listán negro is the most produced wine. The alcoholic fermentation takes place at a controlled temperature of 24 º C, with several daily pumpings. Once it is finished, it is uncovered and pressed immediately. Then, after the malolactic fermentation, it is clarified and filtered. It is a pleasant wine and quite fruity.

El grifo Rosado is refreshing and with pleasant aromas of forest fruits, its color resembles the pink of Provence.

El Grifo Malavasía Colección is a white wine which is stored in wooden barrel for 3-4 months. It is a very interesting wine for the fans of this type of white.


Bodegas El Grifo also produces the sparkling Malvasía Brut and Brut Rosé. They are pleasant to cope with high temperatures and offer a good pairing with snacks and fish.

So when you visit Bodegas El Grifo you should definitely try Listan negro.